Measure of Variability or Dispersion

We have studied about finding the central value of a dataset, here in this article we are going to discuss about variability/spread in data. It shows how far the data is from the center. 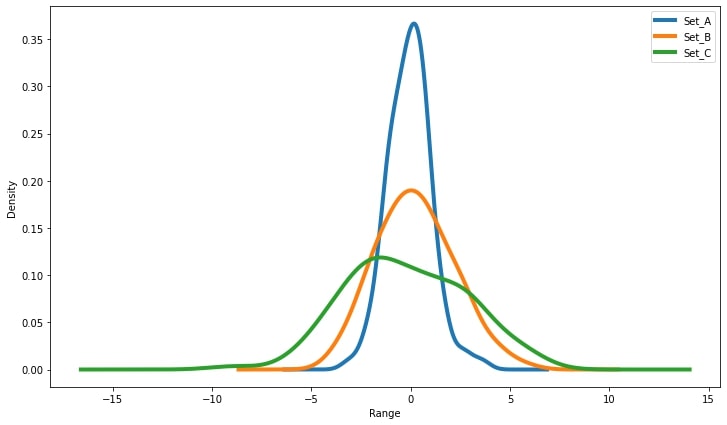 There are 3 kinds of datasets and each of them has a different kind of distribution.

- Set A is more concentrated towards the center

- Set C is widely spread across the axis

For Example, Suppose as part of my daily commute in Bengaluru, I travel from Koramangala to Indiranagar daily by choosing one of the two roads. Below is the history of my past 75 trips on each road:

Have you understood which road is better to choose for my upcoming ride?

Blueline is more concentrated towards the center and the orange line is widely spread across the axis. It means we are highly confident that if we travel through Road A, it will take 30 to 35 mins on average, but if we travel through Road B there are good chances that it may take more than 40 mins also. Hence Road A may prove faster than Road B for an upcoming ride. We are going to prove this concept later in this tutorial through metrics. Keep Reading.

Note: You can download the data set from this link and try finding out the metrics from your end also

It is the average squared deviation of data points from the mean.

The variance of the time taken through Road A for given 75 observations is 36.24

The variance of the time taken through Road B for given 75 observations is 97.81

Hence, as the variance of Road B is high means data points are varying much from the average time taken, so if we choose Road B, we are not much confident on the stability part, it may take a higher commute time.

It is the square root value of the variance.

The standard deviation of the time taken through Road A for 75 observations is 6.02

The standard deviation of the time taken through Road B for 75 observations is 9.89

Standard deviation also tells you the same thing but it is just the squared-root value of the Variance.

Difference between Variance and Standard Deviation:

Before IQR, let us understand Range

The range is the difference between the highest and lowest value of a dataset.

According to our above example:

But note that Range can easily get impacted by outliers.

Hence, there is a refined metric called IQR which does not get influenced through outliers.

IQR (Interquartile Range) is the difference between Q3 and Q1

So IQR helps us in providing a central 50% range and it is unaffected by outliers in the dataset.