A Dataset can have multiple problems with it and before putting the data into a machine learning model or before doing any statistical analysis, it is required that data should be cleaned first. It can have issues such as

As you are already familiar with titanic dataset, but we have added a few more scenarios into it for this tutorial purpose.

Column names should be consistent enough across the dataset. Sometimes there can be spaces in between the column names, or may be in the start or at the end, and it becomes hard to see through naked eyes. One of the good approaches is trying “.columns” with the data frame name, it outputs the column names with quotes.

Index(['Passenger Id', 'Survived ', 'Pclass', 'Name', 'Gender', 'Age', 'Fare', 'Embarked'], dtype='object')As you can clearly see, there is space present in PassengerId column and space present at the end of Survived column.

We can rename the column names as per our wish.

But when we see such scenarios, there is a requirement of fixing the issue.

Let us check the data types of the given data set:

All the data types are correct except the Survived column. As it contains 0 (not survived) or 1 (survived), then the data type of this column must be int or float. Let us look at the data for this column. 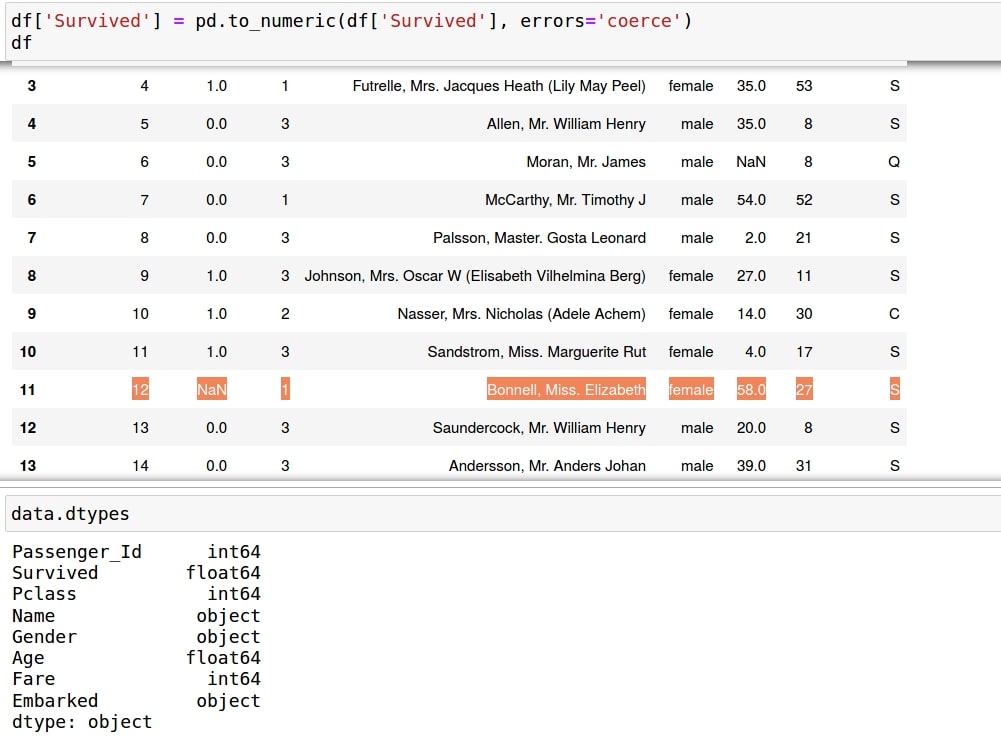 In the highlighted row, it is clear that after the fix, the erroneous value has been replaced with NaN and the column type has been changed to float from text.

There are 3 options available with errors argument, you can try all of them and can see their behaviour.

Columns can have some of their data values as missing.

We can drop those particular records from the data set itself, but this may lead to information loss. Alternatively, we can impute the missing data values.

Imputation (filling out the missing values) can be performed by:

Outliers are extreme values whose chance of occurrence is low. A Data set can have outliers, and while performing any analysis, it is necessary to handle outliers because outliers in data can affect your analysis deeply.

So all these are the cases where data values are so extreme that their chance of occurrence is very low, means usual/general data points are different from these cases.

There are multiple ways to handle the outliers:

1) Easiest way is to drop the records where you find the outlier. But this is the worst treatment as we are losing the information

2) We can cap the Outlier values to some threshold.

Set all the salaries to 15 if it crosses 15 Lacs

3) We can use transformations. Transformation like log, changes the scale of data and outliers remains no longer an outlier.

4) We can assign outliers to some other category.

For example, we can set all the rare data points value as -1

This will make sure that each row is different from each other.